I have a been a Beatles fan for most of my life.  As a young girl, my friends and I used to build a house by draping blankets over the jungle gym in the back yard.  Then we would argue over who got to be married to John or Paul.  No one ever wanted Ringo or George - it was always John or Paul...  We would pretend to cook dinner and make up all kinds of scenarios, but mostly we were just got to say we were married to John or Paul and made fun of whoever got stuck with Ringo or George!

I had all kinds of Beatles memorabilia in my room, but my Dad threw away all of that "junk" years ago...  Oh, how I wish I still had the bobble heads and the posters..  In recent years, I have been acquiring old Beatles albums - mine are literally falling apart.

I was never lucky enough to see the Beatles in concert - saw Ringo several years ago with his All Star Band.

Until last night and then I was privileged enough to see Paul McCartney play at the BOK Center in Tulsa.  I had heard stories from friends about how awesome he was in concert.  I am hear to tell you, it is all true and then some.  He played for 3 hours!  It was well worth the drive.

The crowd was electric and Paul was absolutely charming!  He sang and sang and sang - played several different guitars (including the 1 he used with the Beatles in the 60's) and played 2 different pianos.  He told fabulous stories and was just genuinely having a good time....  He seemed enamored with saying OKLAHOMA...  LOL  Very funny and still so stinkin' cute...  He wore a royal blue blazer with a white shirt, jeans and black boots that reminded me of the boots the Beatles used to wear.  Need to Google "Paul McCartney's boots".

It was quite a production.  "Live and Let Die" was like a Vegas show - filled with fire, lights and fireworks.  When he sang "Blackbird", the stage was way up in the air and there he was playing his guitar and singing.  All thru the night, he showed videos of the Beatles.  Just such good memories tied to the Beatles and their music.

Music does indeed soothe the soul. Those songs took me back to my childhood thru my adulthood.  This is my music.  Their music had such an impact on my life.  It introduced me to rock 'n roll.  I used to sit on my bed for hours and listen to their albums.  And just dreaming about those Beatles.  I just knew at some point, Paul McCartney would appear on my doorstep and ask my Dad for my hand in marriage...

So, my darling friend and I drove home last night reveling in the magic of the night and arrived back in Oklahoma City around 1:00 am...  Very long night, but wouldn't have missed it for the world.  Thank you Cois for going with me - always so awesome to share with a good pal....

P.S.  I have on my NEW Paul McCartney T-shirt today....  Will probably sleep in it tonight, too! 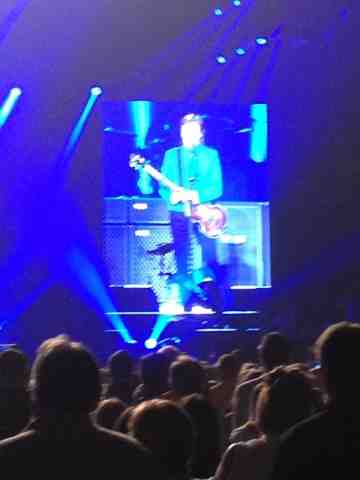 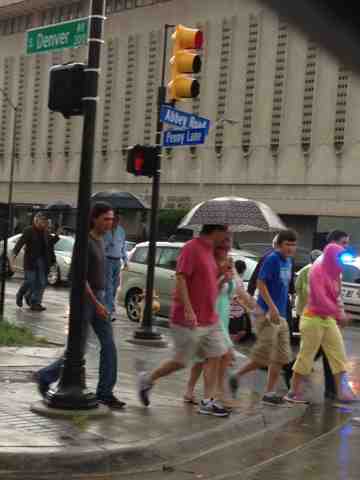 Posted by buffythecougarwannabe at 8:37 AM